Turns out that hiking with bears is a whole thing. Park rangers in Yellowstone and Glacier National Parks are constantly advising (lecturing?) unprepared tourists about how to be safe around all sorts of wildlife. But hiking with bears seems to be a pretty special niche, which some pretty specific rules. And you know how when the stewards on the plane tell you the safety procedures, but you’ve already plugged in or zoned out? That’s me! I heard them, but wasn’t *really* listening.  So unfortunately, when I actually found myself sharing the trail with a big ole black bear, my first instinct was to take a picture! Bad Kathryn!

Sam and I were on a pretty hard core hike in Waterton Lakes National Park up in Canada to Crypt Lake. Along the way, pretty much every other hiker we passed or enountered had all seen bears. After an arduous climb up to the top, we were feeling accomplished as we entered the final stretch, but honestly, a little disappointed that they only wildlife we’d seen thus far was a supremely adorable marmot.

Well – we wound around one of the final bends in the trail, and lo and behold, about 30 feet in front of us, in the trail, munching on the bushes, was a giant black bear.

Mr. Bear looked at us as we sputtered to each other “a bear! a bear!!” and each of us stupidly reached for our cameras. I mean, that is definitely not what you are supposed to do when you encounter a bear! What you are supposed to do is to periodically holler out while hiking, and talk a lot (not a problem), to make sure they can hear you so they can choose to stay away. And if you happen to encounter one, you need to back uphill slowly, while talking to the bear, to give it space to leave on it’s own. And it’s not a bad idea to pull out your can of bear spray in case your bear is aggressive and charges you.

So after snapping a photo, and scolding my husband for doing the same, I squealed at Sam to get the bear spray. But I had the bear spray in my backpack, and I wasn’t supposed to turn my back to the bear. Right??? Ok, that’s ok, I’m sure I can just reach it awkwardly while watching the bear that was now walking towards us along the trail! Nonono Mr. Bear – please do not approach the humans!

By the time Sam and I had backed up along the trail several switchbacks and had finally maneuvered the bear spray out of the backpack, the bear was lumbering on his merry way, disappearing in the bushes on the hillside, leaving us safely behind. 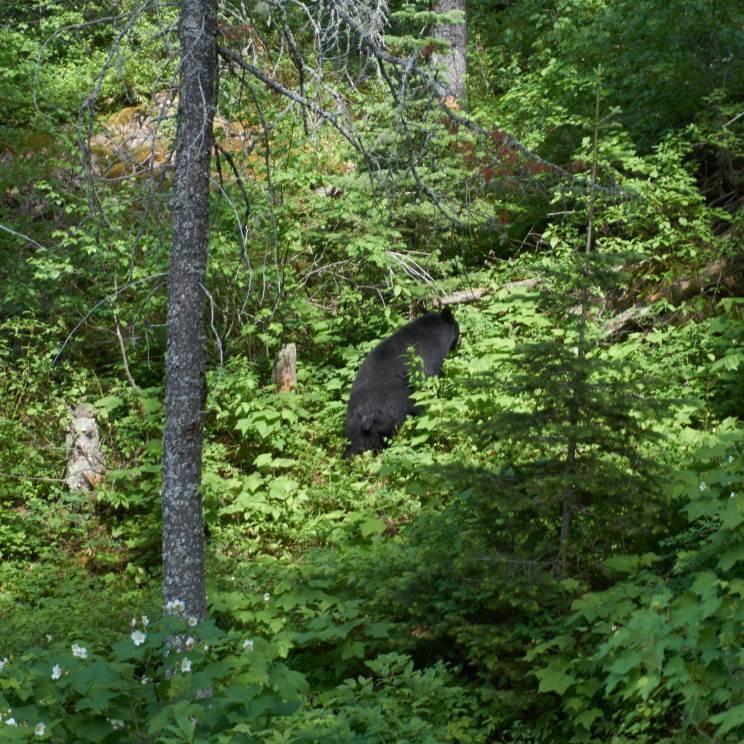 Mr. Bear going along his merry way, leaving us humans behind…

My heart was pounding, and my husband was grinning ear to ear, and I was immediately grateful for the park rangers, the signs, the guide books, and the fellow travelers who had all prepared us for this encounter, despite our best efforts at being stupid tourists caught hiking with bears.